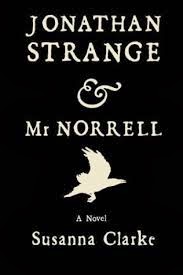 Susanna Clarke is a master of phrasing and evokes mood and emotion with the best writers I've ever read. Jonathan Strange & Mr. Norrell is a word-lovers paradise and would be perfect for Anglophiles looking for an alt-history period piece rich with description and fascinating personalities. Having said that, there are two things that may prevent some readers from enjoying this book as much as others.

What the Writers are Reading, Part 2

When a new fan asked me for book recommendations, I realized it's been a while since I've freshened up my reviews, mostly due to the fact that I've been too busy writing to read! Then they asked me a great question: "What are the writers reading?"

The Deep, by Tom Taylor and James Brouwer 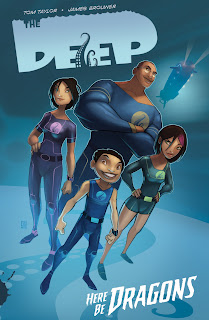 Don't forget to support your FLCS*

"...Tom Taylor and James Brouwer can craft tension, comedy, action, and family dynamics with the best creators in the industry."

I came across The Deep while wandering the floor of San Diego Comic Con this year. The cover and title immediately caught my eye and when Gestalt Comics' editor-in-chief, Wolfgang Bylsma, started talking, everything he said made me want the book more:

What the Writers are Reading, Part 1

When a new fan asked me for book recommendations, I realized it's been a while since I've freshened up my reviews, mostly due to the fact that I've been too busy writing to read! Then they asked me a great question: "What are the writers reading?"

Those of you who follow me on Facebook know that I've been putting up a new fence over the last couple of weeks. Besides the satisfaction of days of hard work, it also gave me a chance to catch up on podcasts from Wizards of the Coast, Writing Excuses and Science Friday. Well, the fence is up and after a few more hours of staining this morning I'm calling it a win! That also gave me a chance to get in a couple of interviews from one of my favorite podcasts of all time, Adventures in SciFi Publishing.

I've been a fan of AISFP for many years. Shaun Farrell and then-co-host Sammantha Wynns were a regular part of my writing day. I'd wake up, put on a 45-60 minute episode, and then do my chores before getting my butt in the chair. I'd feel accomplished getting things done around the house while my brain warmed up for putting words on the page. Today I treated myself to a pair of interviews I'd been looking forward to for months from two very cool authors I had the pleasure of meeting at last year's World Fantasy in Toronto.

It was  Travis Heermann's novel "Heart of the Ronan" that first caught my attention at WFC's signing event. Heart is a Japanese-history-inspired action adventure (and you know how much I enjoy Asian-inspired fantasy), but in this most recent interview he's discussing his newest novel "Rogues of the Black Fury". In Rogues, Travis explores what modern day special forces training would look like in a renaissance-inspired fantasy setting. I love stories that speculate how history may have been different if certain things had been discovered earlier, and though Rogues isn't an alternate history, I'm fascinated by the juxtaposition of renaissance-era technology and modern tactics. Shaun and Travis also discuss the pros and cons of podcasting your novels and the risks of modern e-publishing techniques devaluing an author's work in the public eye.

Tina Connolly described her first novel, "Ironskin", as "steampunk Jane Eyre with faeries, but really it's none of those." Once she started explaining what she meant, I was hooked. The story is set in a post-WWI inspired world, where their war had been between fae and humans. Tina's faeries aren't Tinkerbells and Petalwings either, they are dark, unseelie faeries and the main character, Jane Eliot, is a war survivor whose face had been damaged by shrapnel--shrapnel that carries residual magic which curses its disfigured victim. The only way she can keep the curse at bay is to wear an iron mask. PTSD in this post-war world involves nightmares of fae possessing the dead bodies of loved ones, forcing survivors into a routine of cremating their dead.

There is something about the way Tina melds and twists the fae/human relationship with imagery from The Man in the Iron Mask and Foyle's War that intrigues me.

If you haven't checked out AISFP, don't wait. There are hundreds of hours available. Shaun, Moses Siregar and Brent Bowen discuss what's happening in the publishing industry as well as posting interviews with new and established authors. You can find the interviews with Tina and Travis linked below and if these books sound as interesting to you as they do to me, link over to AISFP, Amazon or, better yet, stop by your FLBS and pick up some copies. 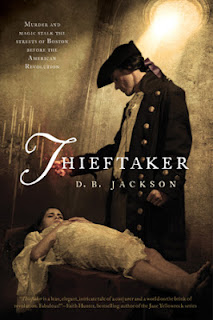 I'm veering from my normal reviews to shout-out an author and a novel that has been banging around in my head for the last year. Failing my search for Brent Weeks at the WFC 2011 signing event, I stumbled across David B. Coe (aka: D.B. Jackson) sitting at the table where Brent was supposed to be. It was David's sincere 'hello' that first caught my attention, followed immediately by the stunning cover of his novel "Thief Taker." Growing up in Kentucky, my brother and I played with tri-corner hats and Kentucky long-rifle replicas as kids--so I am the target audience for that cover. Two minutes of conversation had me hooked--both on the author and the novel.

Tales of the Emerald Serpent: Between 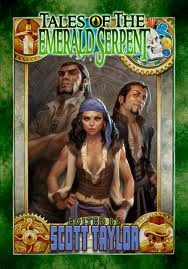 I'm a writer. What I mean by that is that I'm not an artist. I've taken some drawing classes and feel I can appreciate art when I see it, but it takes an exceptional artist to grab my attention and a truly unique one to make me gush.

Todd Lockwood is that artist.